The Federacja Stowarzyszeń Naukowo-Technicznych, NOT (Association of Science and Technology Oriented Organisations, NOT) welcomed all the EMERGE projects partners to Szczecin, Poland for the initial two-day meeting of the project. It was a highly productive meeting around a topic of very significant importance, not just in Poland but across Europe. Katarzyna Łobacz – Director for innovation and development, University Professor and all-round kick-ass leader was the Chair for the meeting ensuring everyone stayed awake and the meeting progressed as per the Agenda.

Katarzyna went on to explain that increasing the number of female entrepreneurs is a key priority in the EU for reasons linked to economic and social development. While Poland has a higher than average percentage of Female Entrepreneurs compared to the EU 34% v 30% , when you consider that Women constitute 52% of the population it can be seen that more needs to be done – especially as most studies confirm that women are as entrepreneurial as men. From an economic and social point of view, it is necessary to promote and facilitate female entrepreneurship. 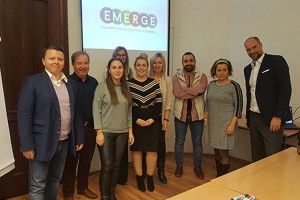 She stated that young women in Poland are more likely to have a university degree than young men however there are major gender differences in subjects studied: about 75% of university graduates of courses in health and welfare-related studies were women, compared with only 24% women in engineering. As a result, women make up 81% of workers in health and social services and 71% of teachers (OECD). The lack of female entrepreneurs is most evident in the field of Engineering. In 2015 women made up just 14.4% of Ireland’s Engineering workforce and slightly higher at 16.9% in Poland (OECD) while the share of female entrepreneurs in Norway is extremely low . According to a 2015 report, “an unconscious bias still prevails which designates business and engineering as being typically ‘male’ fields.”

For these reasons, EMERGE has been developed with a clear goal: increase the number of female entrepreneurs in engineering by transforming their access to and the quality of the training they receive from entrepreneurship VET & HE institutions. This involves working with the following target groups:

The project will work with these target groups to achieve the following operational objectives: